So, you played a good game―securing materialistic advantage early on, exchanging the pieces off the board and entering into a chess endgame that probably involves the opponent’s King and your King plus one or multiple of the “heavy” chess pieces―the Rook(s), the Queen or both (yay!).

Now what? I will teach you two checkmating techniques that you can apply right away to crush your opponent instantly. NOTE: THIS ARE FOR CHESS BEGINNERS RATED BELOW 1000.

2 Checkmating Techniques: The Box and The Staircase

Before I start with these two beginner checkmating patterns, let’s first try to understand the concept here.

When your opponent only has a King and you are aiming to checkmate him, the best way to go about it is restrict the movement of his king. If the opponent’s King is in the middle of the board, you must somehow try to push it to one side of the board, just like you push a boxer to the ropes in boxing.

Check the image below for illustration purposes. 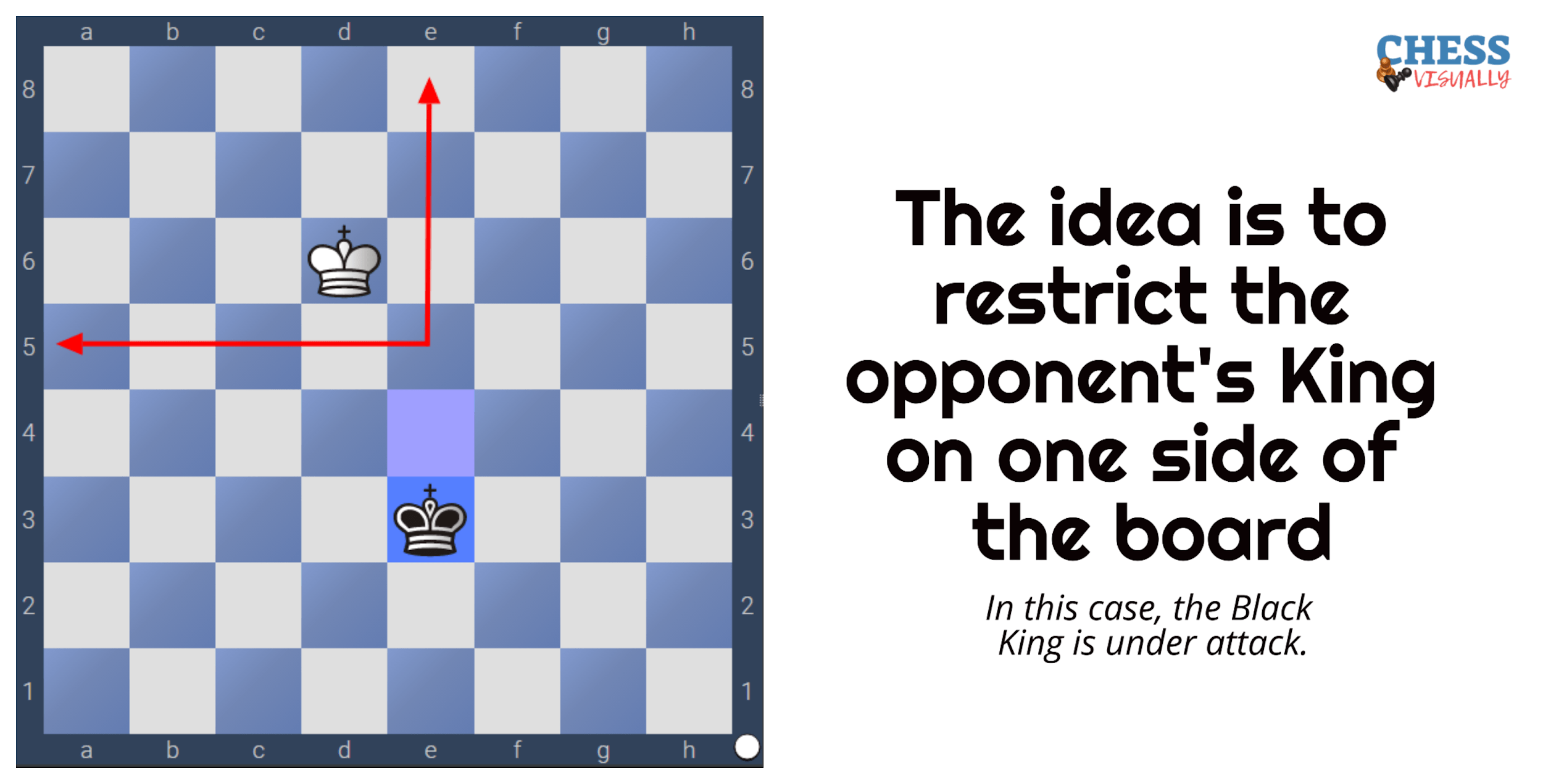 Take the following case. You are white, and you have a Rook and a Queen. The white Rook stops the black King from translocating beyond the c-file. The King is trapped in the a- and b-files of the board. Still, a lot of space to roam about! 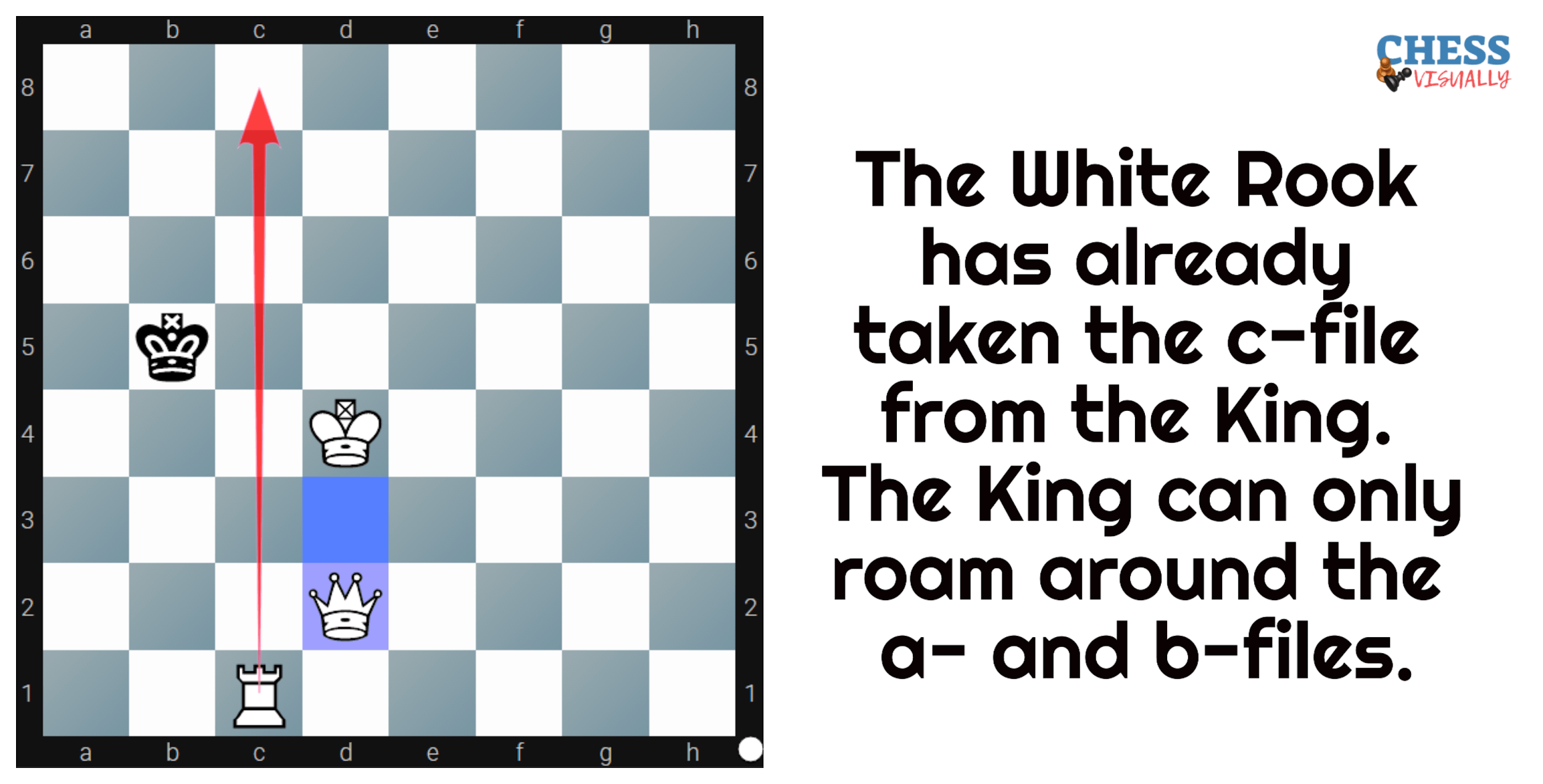 What you would like to do now is push the black King beyond the b-file with your Queen. Bring the white Queen to b2-square driving the black King to one of these three squares on the a-file, viz. a4, a5 and a6.

With the white Rook going for a1-square on the next move, it’s game over for black.

The staircase checkmating technique becomes all the easier if you had two Queens instead of a Rook and a Queen. It’s almost game over in a couple of moves in such instances.

However, let’s make it a little bit harder than it has to be.

How to checkmate if you had two Rooks instead of a Queen and a Rook?

Let our position be like this. The white King on e4, the black King on d6, one white Rook on h7 and the other on f2. What would do next? I am sure you already guessed it.

To restrict the black King and checkmate it by pushing it to one side of the board, Rf5! is the move. It instantly checks the black King beyond the 5th rank. 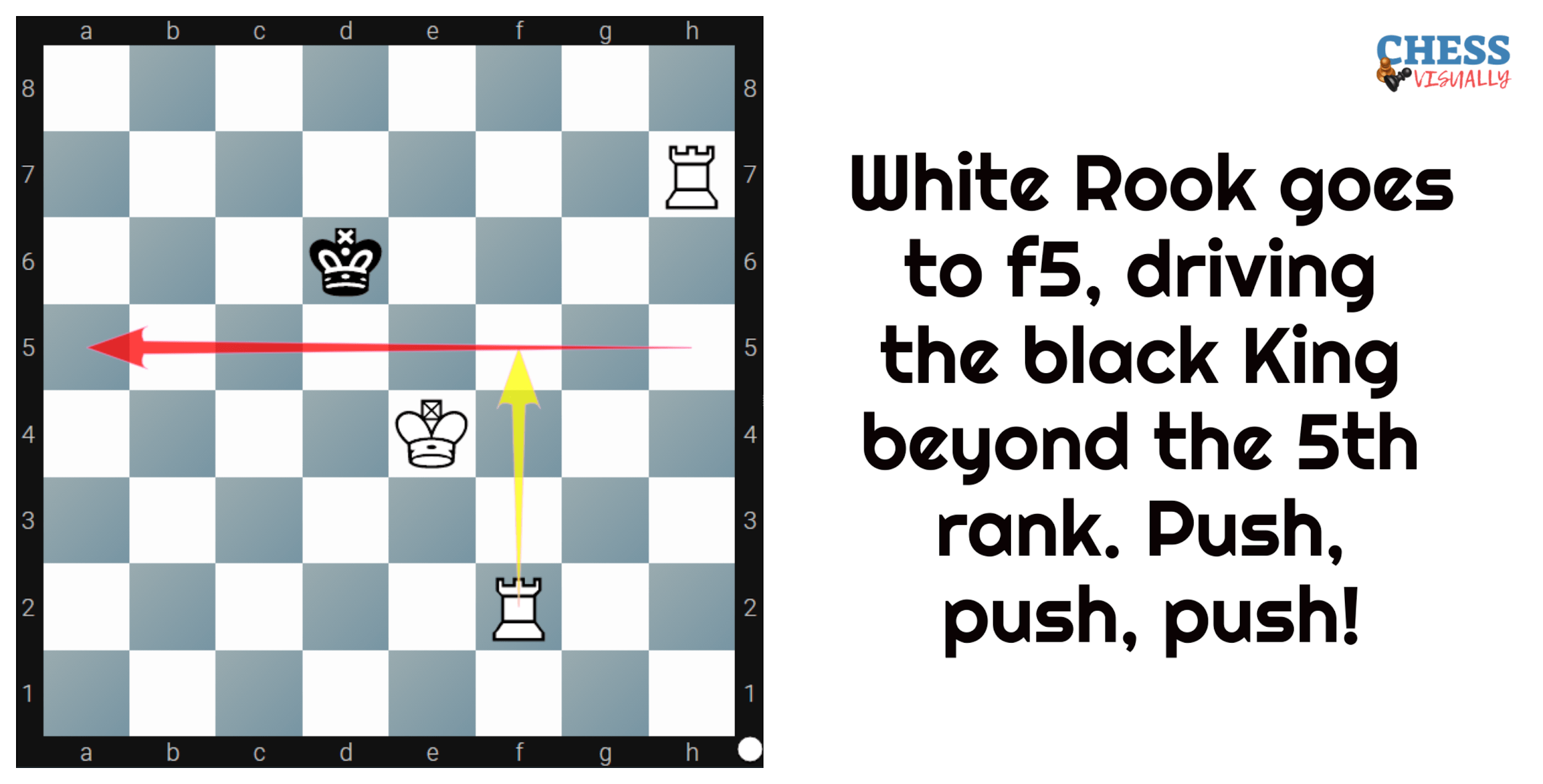 The black King can flee to c6 square or come nearer to pull off a little Daring-do but he does not understand―the end is near.

If the black King moved b7 or c7 squares in the previous move, it would be checkmate in the next two moves―Rf6 and then, Rf8!

However, if the black King somehow chose d7 or e7, giving it the option to later shift to e8, the best way to go about the checkmate is if you could shift the white Rooks on the other side of the board – giving black no option to capture any of the Rooks.

Once the white Rooks get over to b5 and a6 squares, the black King will still try to impede the inevitable result by moving to d7, planning for the c7 square eventually.

No problem. Take the a6-Rook to the other end of the board again. Now the black King is trapped because Rg8 is coming. 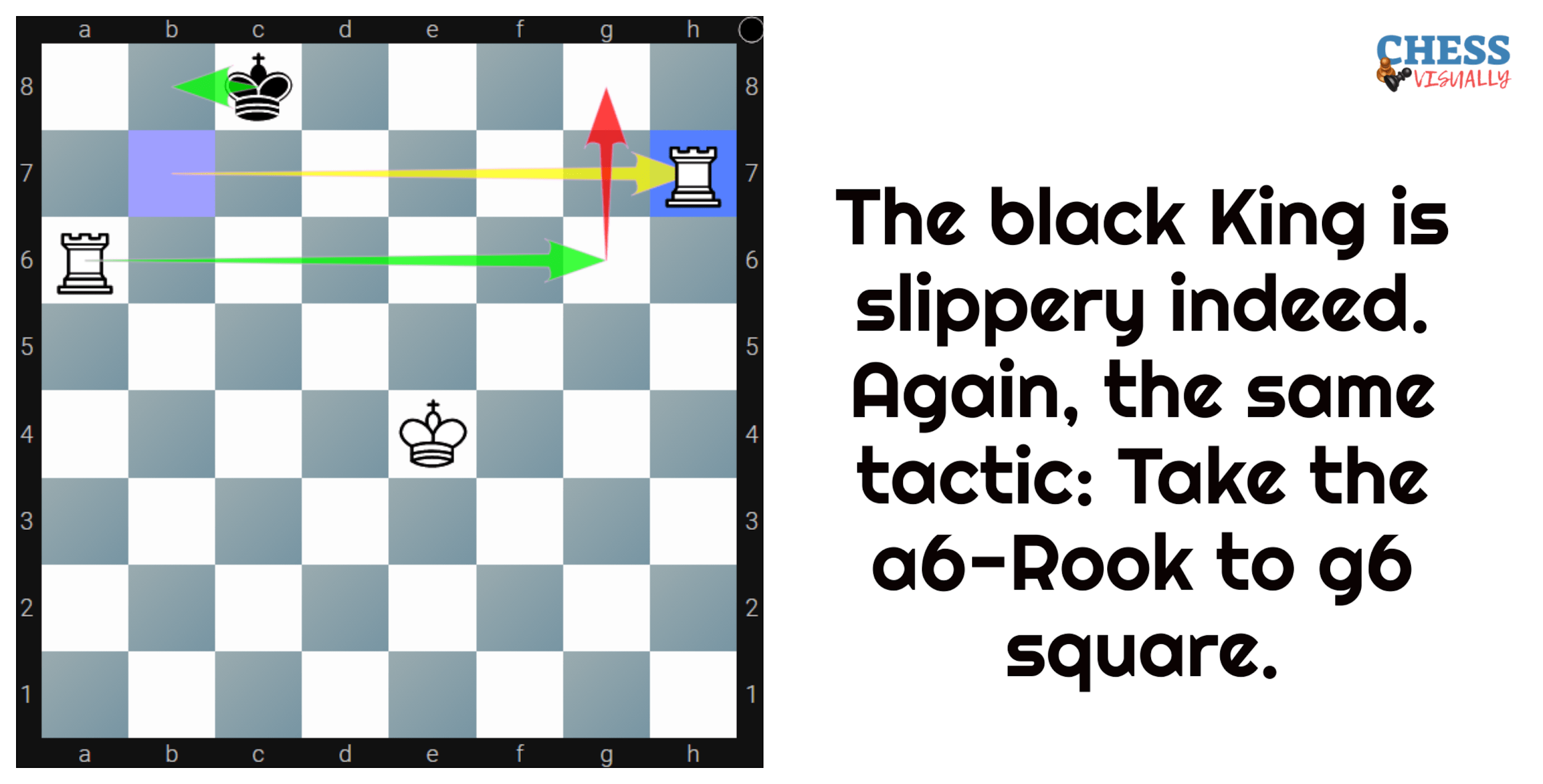 The only thing to remember is that a Rook does not protect another Rook unless it is on the same file or rank. Make sure that your opponent’s King never finds you otherwise.

That’s it for the Staircase checkmating technique.

Next comes the Box Checkmating technique

The Box technique is definitely not the fastest but it’s a nice checkmating pattern that you cannot afford to miss. This is especially useful when you have only ONE heavy piece on board and your King against your opponent’s King.

Rule of thumb: bring your King into the game. 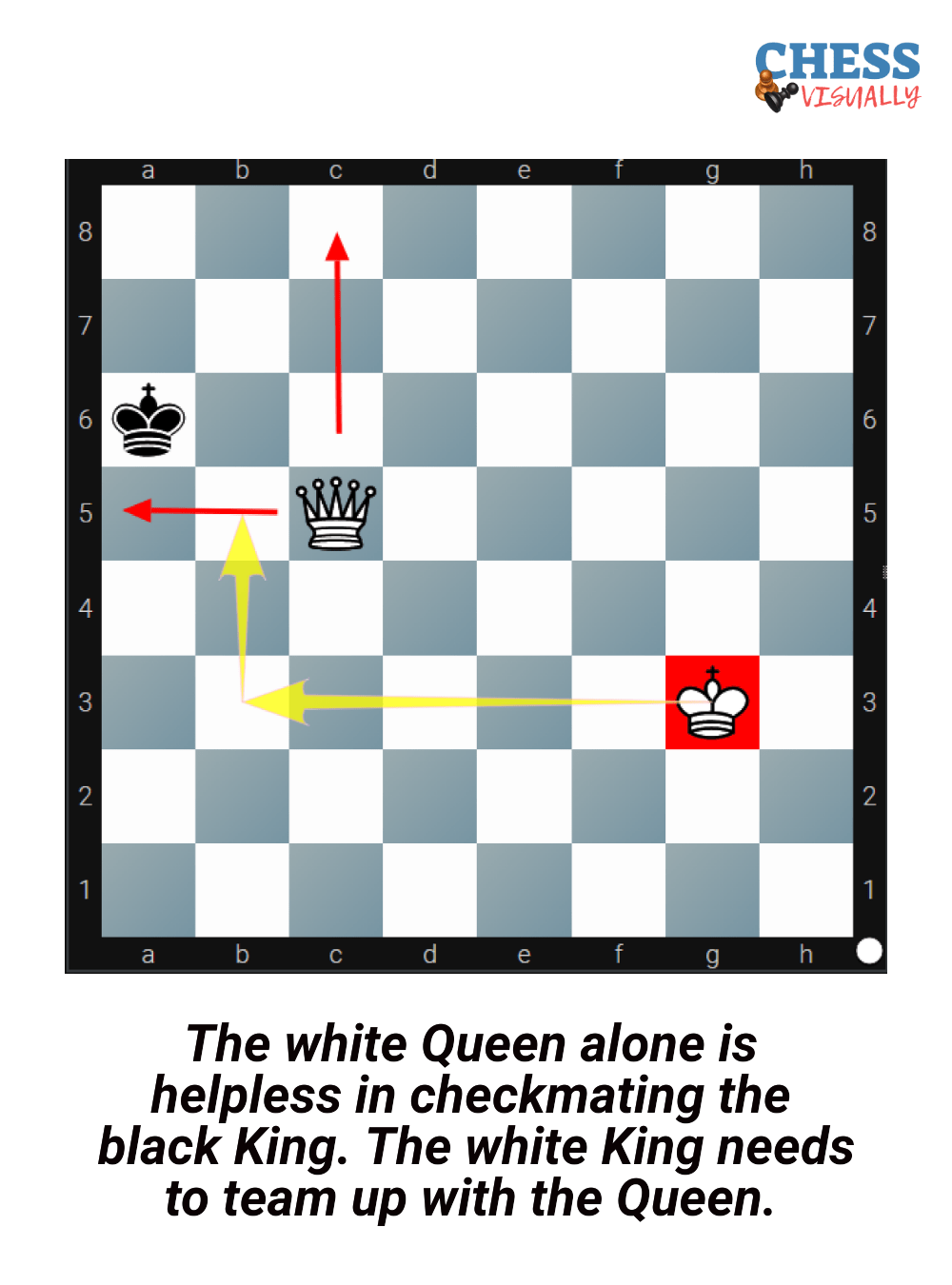 There is another thing to notice here, and the white Queen is already squeezing the liberty of the black King―creating a box around it. It can be said that in positions like this, the checkmating of the opponent’s King relies on how fast and efficiently you can bring your King to the support of your heavy piece and also maneuver the heavy piece in such a manner as to protect it and still restrict the movement of the opponent’s King.

Let’s look at two scenarios. First, with a Rook and a King. Second, with a Queen and a King.

Checkmating with a Rook and a King 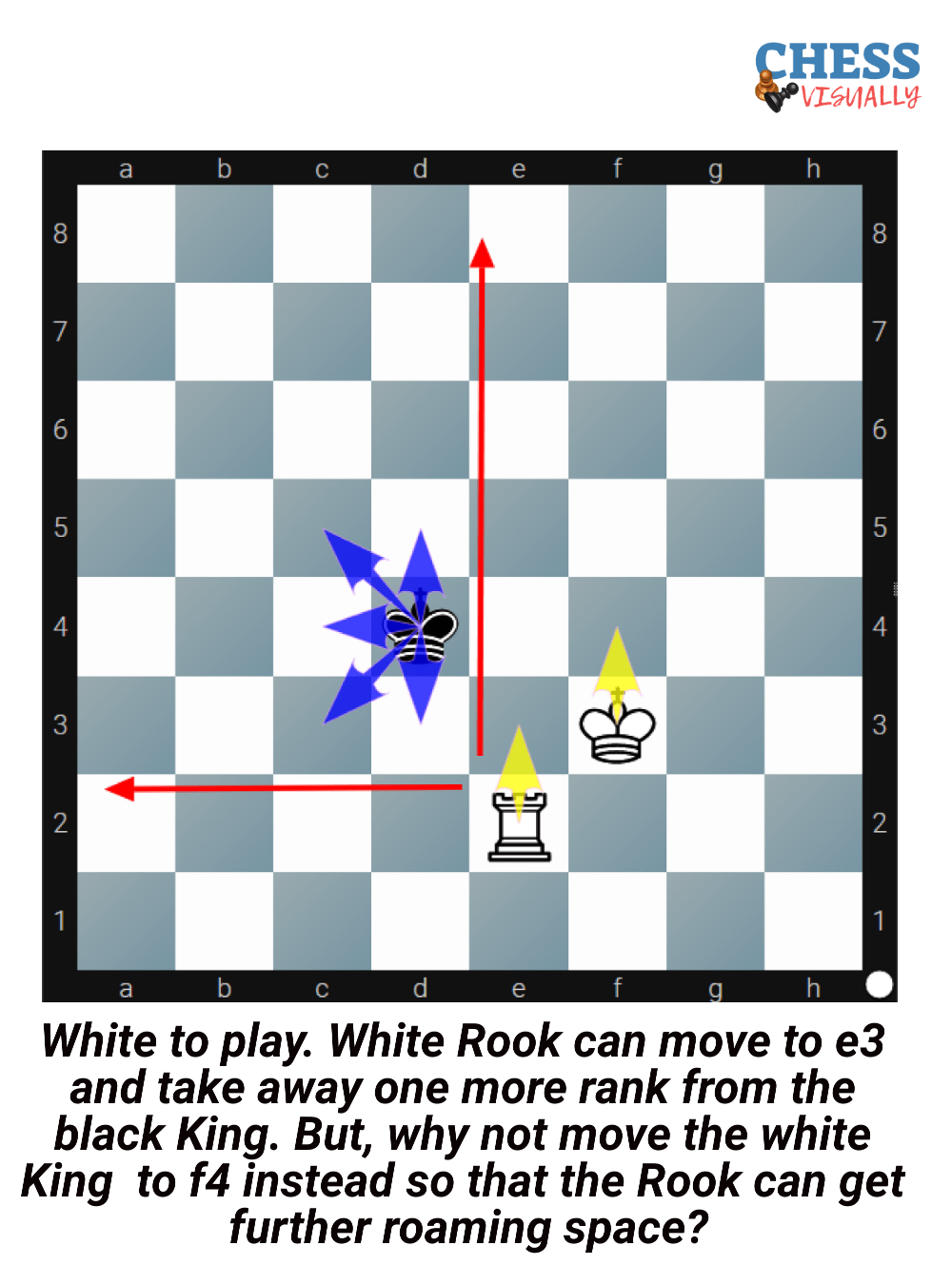 It would shrink the box around the black King and with a little maneuvering of the King and the Rook, you can easily checkmate the opponent’s King. 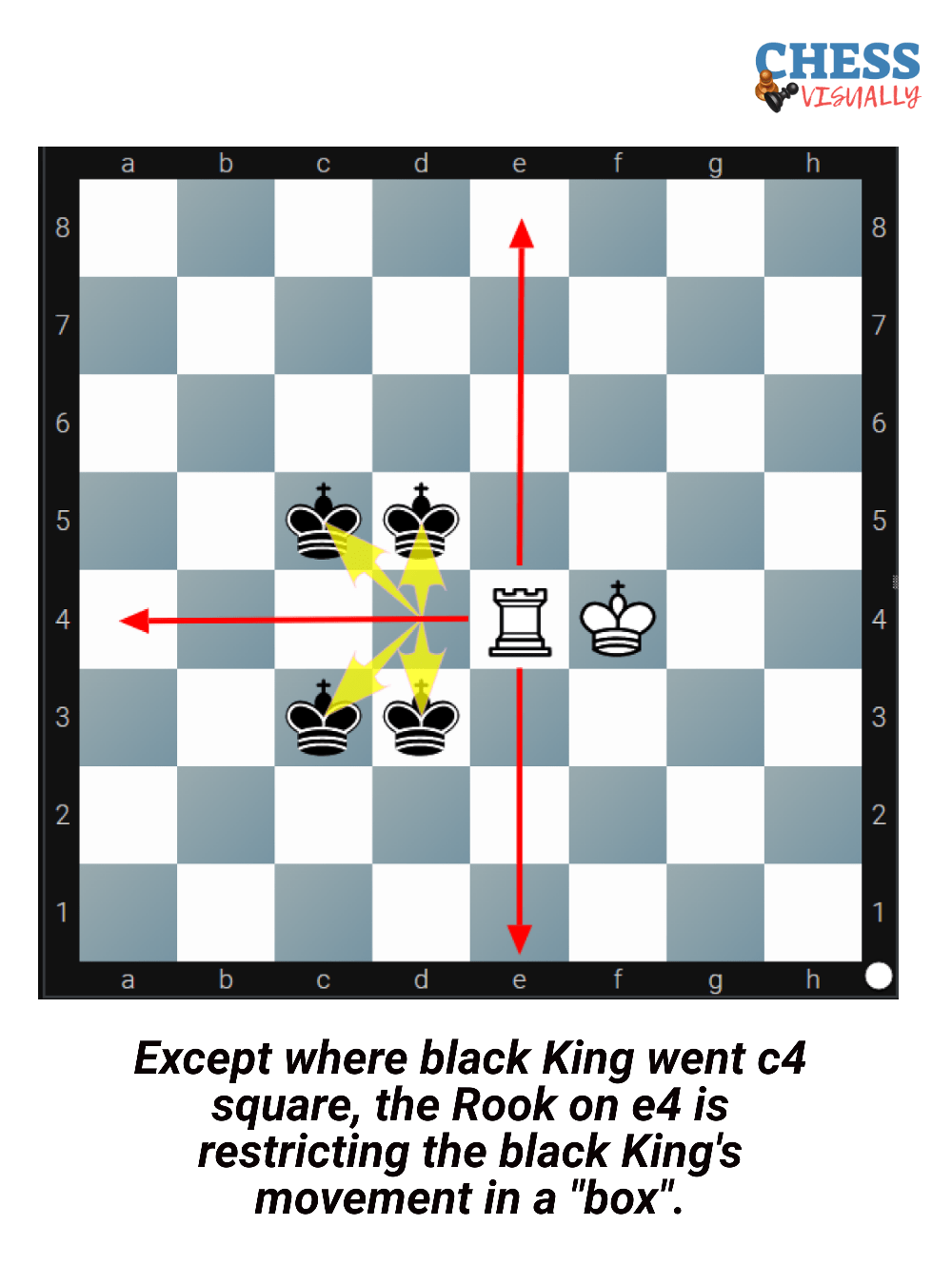 I will show you two scenarios here (considering that the black King moves towards the 3rd rank).

Depending on whether the black King goes to either c3 or d3 squares, the white King moves to e3 and f3 squares. Let’s make it a little complicated. Say, the black King just won’t give up. He goes to the d3 square.

After white moves Kf3, black King has to relent his precious space on the board. He has three squares to choose, viz. c2, c3 and d2 squares. 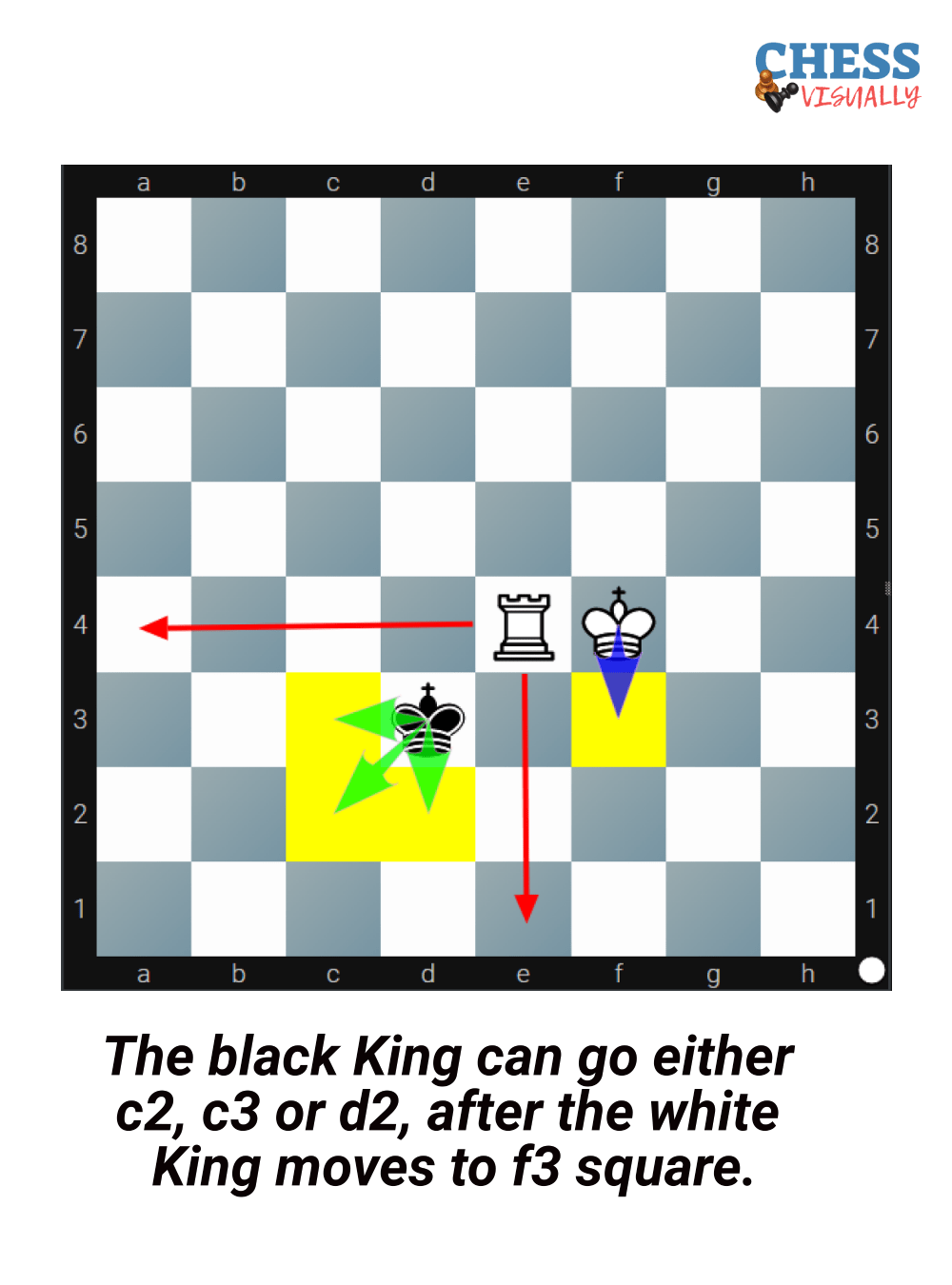 If it goes to the c-file, the white King further closes in on e3 square.

The black King goes to d2 square instead, he comes across Re3. He would have c1, c2 and d1 squares to fall back upon.

If the black King chose the 1st rank, it’s easy. The white Rook takes up the e2 square driving the black King towards the a1 square. This is how it goes.

Let’s say the black King chooses c2 square. The rim of the board is not that attractive, right?

What does white do here? White King slides into the e2 square.

In this manner, two results can happen.

One, where black King falls upon the 1st rank and suddenly the white Rook swoops in to capture the 2nd rank leading to a checkmating pattern like the one above.

Two, where this position is reached. 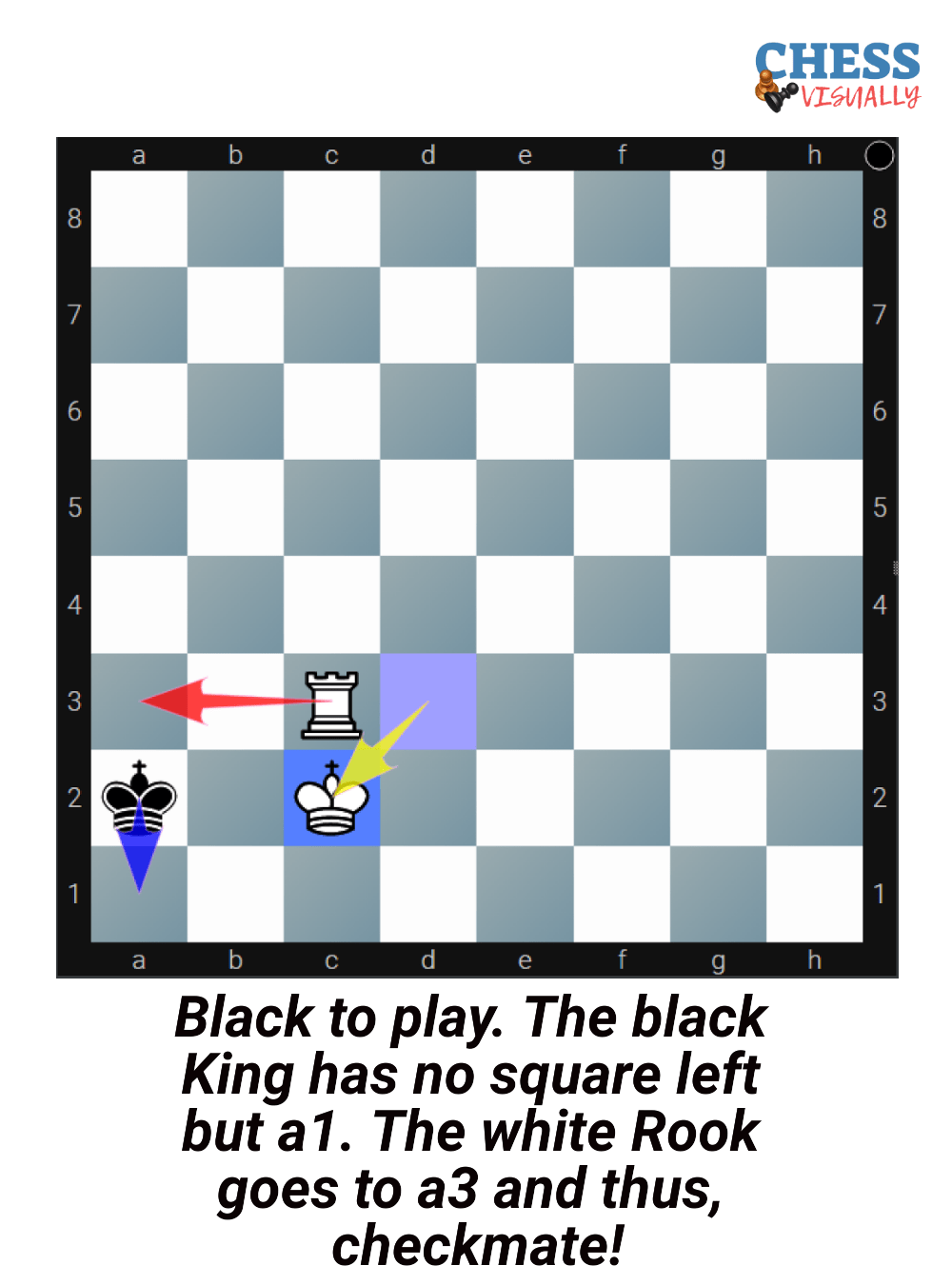 With a Queen and a King, the checkmating is reached a lot faster as you can imagine. However, since the Queen can move horizontally, vertically and diagonally, the black King has to retire sooner than that in the case of a Rook and the King.

However, I hope you understood the theory behind these two checkmating patterns. The pieces either move in a staircase pattern or close in one square after another, leaving almost no space to escape for the opponent’s King. And then comes the final blow: the checkmate.

If you have two heavy pieces, you employ the Staircase checkmating technique.

If you have one heavy piece, you employ the Box checkmating technique.

Struggling at Chess? Time to Shock, Bolt and Win!

In this MASSIVE 15-hour self-study course, GM Simon Williams discusses, in individual lessons, on the most vital BREAKTHROUGHS in chess development throughout his career.

Each lesson is dedicated on at least one of seven areas: strategy, calculation, prophylaxis, forcing moves, navigating chaos, pattern recognition, and converting advantages—the key skills you need to succeed at the highest levels.

Every lesson brings with it an “aha!” moment… and saves you years of painful trial-and-error going through games that just aren’t that useful.