Chess endgames are where games are won. As long as you are playing chess players rated under 2000, tactics might win you games.

However, in the higher echelon of chess, endgames are where most games are won.

Chess masters do not fall prey to cheap tactics! In fact, they don’t fall prey to combinations either most of the time. (Yes, they are “masters” for a reason, after all.) But, they tend to falter in the endgames where technique and precision matter the most.

Yes, one would say that strategic play does decide the endgame beforehand but to decide which chess endgames are favorable for your current position, you need to learn chess endgames first. 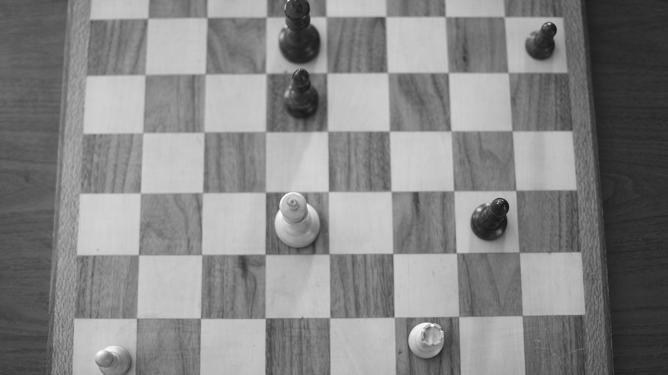 In this article, we are going to talk about 10 important endgame principles to keep in mind while playing.

Your chess training should always start with basic checkmates. King and pawn endings, King and Rook endgames, King vs two Rooks and the more complicated King+Knight vs King+Bishop…you have got to practice these endgames again and again.

You should always start with this because unless you know how to deal with certain endgame positions, you cannot decide which idea to choose in the middlegame.

What is “technique”? Think about the basic king+rook vs king checkmate. You force the opponent’s king towards the edge of the board by using your king and rook in concert. If you know how to do it, you can do it flawlessly, in the fewest number of moves. If you don’t, you tend to blunder around wildly for a while until you either figure it out, get lucky, queen another pawn, or run out of moves (50 move rule).

Technique is, essentially, when you have already gained an advantage, securing that advantage, restricting the opponent’s counterplay and finding the right combination to go in for the kill.

Technique is about efficiency. It is about finishing a won position by knowing what to do (strategic ideas) and the best way to achieve it (analysis of variations).

This might be tricky and might need rock-solid calculation skills. But, if you can create a passed pawn, you must push the heck out of it!

Remember, even if the passed pawn does not get promoted, it might force your opponent to bring in his pieces to prevent it, giving you the opportunity to attack elsewhere.

While during most of the game, the King cowers at a corner of the board or behind a chain of pawns in the center, the King can become a master fighter in the end. This is because of the concept of Opposition. You fight the opponent’s King with your King. Make sense?

So, by the end of the middle game, always make sure to activate your King. Look out for the threats but try to get the King in the middle of the board.

Activating the King in chess endgames can be tricky. But, you don’t want to bring the “big guy” into action too late lest the game is already out of hand by then.

Zugzwang and Zwischenzug. The first one is an unfortunate rule of the chess world that you cannot pass your move ever. If it’s your turn, you have to play it.

In simple words, you enter into a position where if you move, you lose. So, you will lose nonetheless. Crazy, isn’t it?

Also, look out for the second one. It means intermezzo, intermediate or “in-between” moves. Moves that are played before the one expected and are often played to gain advantage instead of merely exchanging the pieces in tension.

Normally, every such intermezzo move is forcing in nature so that your opponent has to reply to it. Look out for these opportunities for yourself and your opponent.

Always remember, chess is about playing two sides of the board at once. Unless you decide the right continuation for your opponent, you will not be able to know whether he is inaccurate or not. It’s like playing as both and expecting the game to end in a draw.

This one is BIG

Well, your calculation starts when you know what the “dream position” for both the players will be. Once your opponent plays the move, imagine what setups he might concoct from this current position and what are the sequences he might follow to reach the same. Same goes for you.

The phrase that should always be on your mind is ‘attacking targets’. Look for immediate threats. If there aren’t any, look for distant threats by visualizing the future position and which squares are going to be affected.

…For both your opponent and you.

Decide the long-term strengths and weaknesses, and plan how to reach your goal through calculating through variations. GM Khachiyan calls this “thinking from the end”. The concept is simple. You visualize the desired future position and you calculate which moves might take to reach there.

You want to make sure that your plans get fulfilled while you thwart your opponent’s plans at the same time. Who said chess is simple?

The problem is, I never really utilized them. They were all sitting on the second or the seventh rank with one slightly advanced, maybe. In the endgame, if you end up with a pawn majority on a particular side bring your King to the center or that side and keep pushing the heck out of those pawns forward.

Endgame Rule #8. Not an endgame rule but still matters

This is probably the most important of all. If you gained an advantage by creating a weakness in the enemy’s camp, go and create ANOTHER one.

Remember, against a tough defense, even an extra pawn is not enough. How many Rook vs Rook endings end in a draw? Quite a lot, right? Okay, haven’t you faced situations where your opponent sacrificed his Bishop to stop that pawn promoting on a8 and you were left with a King+Bishop vs King ending? Basically, a draw.

So, one advantage is never enough. Try to create another one (which should be easy since you already have the advantage to start with!) and secure your first advantage.

That’s how you win endgames. Endgames are all about precise calculation and that means complete dedication and hard work. Will you accept the defeat in your next tournament game or will you go ahead and become a master of chess endgames? Your choice.